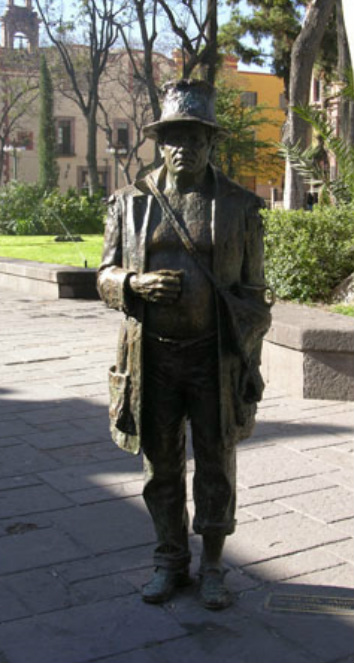 Juan del Jarro Statue, San Luis Potosí
The foundation of the Azíos Hispanic Scholarship Fund, Inc. was laid by Juan de Dios Azíos, a celebrated, historical figure from San Luis Potosí  who lived from 1793-1859, during the colonial period in Mexico, and is an ancestor of the Azíos family.  Juan Azíos was born on an hacienda, and could have lived there comfortably with his family, but he struck out, in the midst of a raging civil war and profound turmoil throughout the country, on a mission to aid the less fortunate in the streets of San Luis Potosí.

Soon he became known as Juan del Jarro because he carried with him at all times a small clay jug, or jarro, with a leather strap that hung on his shoulder and down by his side.  In this clay jug, he collected contributions to help others in need.

But, Juan del Jarro Azíos was a deal-maker, an entrepreneur in the streets of San Luis Potosí   For every donation he collected in his clay jug and distributed, he negotiated a significant promise from donors and recipients alike: I will give back to the community.

His words continue to inspire us today as they have since 1859:  "In this clay jug, there is a constant flow.  We give, use, return.  We cannot afford otherwise."  It is from the example of Juan de Dios Azíos that our family proudly established the Azíos Hispanic Scholarship Fund, Inc.